This week we are doing 2 new topics, what rooms/places there are in our school and clothes.  I hope you will the worksheets self-explanatory.  Bonne chance!  (Good luck!). Here are this week's worksheets (WB le 22 juin).

Complete the work on the Word documents and email me your work at mlue-cooper@sfdprimary.co.uk, please.

Unfortunately, there are no more video clips to watch because these topics occur in Stage 2 of the Early Start course.  We have been watching video clips from Stage 1.

History - The Kingdom of Benin

The kingdom of Benin began in the 900s when the Edo people settled in the rainforests of West Africa. By the 1400s, they had created a wealthy kingdom with a powerful ruler, known as the Oba. The Obas lived in beautiful palaces decorated with shining brass.

Gradually, the Obas won more land and built up an empire. They also started trading with merchants from Europe.

Watch the clip below to learn more about the Benin civilisation. 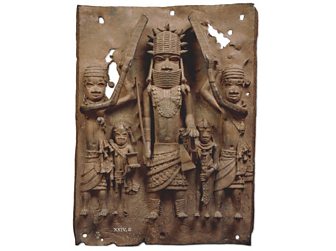 A brass plague shows an Oba with his attendants

How did the kingdom begin?

Around the year 900 groups of Edo people began to cut down trees and make clearings in the rainforest. At first, they lived in small family groups, but gradually these groups developed into a kingdom. The kingdom was called Igodomigodo. It was ruled by a series of kings, known as Ogisos, which means ‘rulers of the sky’.

In the 1100s, there were a series of power struggles, and the Ogisos lost control of their kingdom.

The Edo people feared that their country would fall into chaos, so they asked their neighbour, the King of Ife, for help. The king sent his son Prince Oranmiyan to restore peace to the Edo kingdom. Oranmiyan chose his son Eweka to be the first Oba of Benin. Eweka was the first in a long line of Obas, who reached the peak of their power in the 1500s. 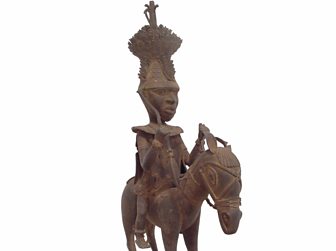 This brass figure is believed to be Prince Oranmiyan. Edo legend says that no one in Benin had ever seen a horse before Oranmiyan arrived!

How did Benin become an empire?

Around 1440, Ewuare became the new Oba of Benin. He built up an army and started winning land. He also rebuilt Benin City and the royal palace.

Oba Ewuare was the first of five great warrior kings. His son Oba Ozolua was said to have won 200 battles. He was followed by Oba Esigie, who expanded his kingdom eastwards to form an empire and won land from the Kingdom of Ife. Ozolua and Esigie both encouraged trade with the Portuguese. They used their wealth from trading to build up a vast army.

The fourth warrior king was Oba Orhogbua. During his reign, the empire reached its largest size. It stretched beyond the River Niger in the east and extended west as far as present-day Ghana.

Oba Ehengbuda was the last of the warrior kings, but he spent most of his reign stopping rebellions led by local chiefs. After his death in 1601, Benin’s empire gradually shrank in size. 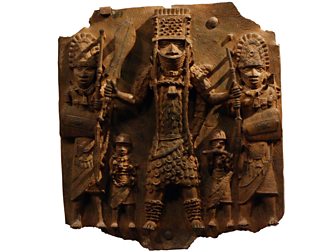 This brass plaque shows the Oba, or King, of Benin and his attendants. Why do you think the Oba is shown to be much bigger than the other people?

How did traders from Europe see Benin?

Benin City is at least four miles wide. The city has wide, straight roads, lined byhouses. The houses are large and handsome with walls made from clay. The peopleare very friendly and there seems to be no stealing.

Inside the city is the king’s court. It is large and square and surrounded by a wall. Thecourt is divided into many palaces with separate houses and apartments for courtiers.

The court has many galleries flanked by wooden pillars. Fixed to these pillars areshining metal plaques showing battle scenes and deeds of courage. The roofs of thepalace have pointed turrets and on top of each turret there is a copper bird withoutspread wings.

The king shows himself just once a year to his people, riding out of his court onhorseback. He is beautifully dressed with all sorts of royal ornaments. Three or fourhundred noblemen accompany their king, some on horseback and some on foot.And a great number of musicians walk before and behind him, playing merry tunes onall sorts of musical instruments.

The king doesn’t ride very far from the court, but soon returns after a little tour.Then he orders some tame leopards that he keeps, to be led about the city in chains.

How did the kingdom end?

By the 1860s, Benin was no longer a powerful empire, and the Obas struggled to rule their people.

Benin was also under threat from Britain. The British wanted to gain control of Benin so they could get rich by selling its palm oil and rubber. The Oba tried to stop all contact with Britain, but the British insisted on their right to trade.

In 1897 a group of British officials tried to visit Benin. They were sent away because the Oba was busy with a religious ceremony, but they decided to visit anyway. As they approached the borders of Benin, a group of warriors drove them back, and several British men were killed.

This attack made the British furious. They sent over a thousand soldiers to invade Benin. Benin City was burnt to the ground, and the kingdom of Benin became part of the British Empire.