Tell Me No Lies - Malorie Blackman 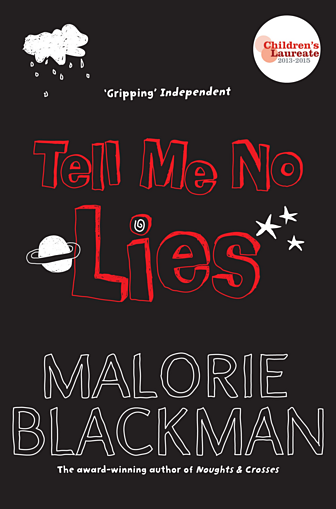 Read the text below from the above book, keeping the following questions in mind:

Gemma turned the page. Here, a mum with smiling eyes and untidy hair like a halo hugged her daughter tight, whilst the headline below the photograph yelled out, MOTHER SAVES CHILD FROM OVERTURNED CAR. And on the opposite page, a mum standing next to a boy, her arm around his shoulders. The headline that went this photograph declared, MUM FLIES OFF WITH SON FOR NEW HEART. Gemma only ever kept the headlines that went with her mums – never the full newspaper article – but she could remember the story that went with this one. The mum’s son needed a heart and liver transplant and the doctors in Britain had all but written him off. But not his mum. His mum was determined to do whatever it took to keep her son alive, so she’d taken him to America. And it had had a happy ending. The boy received his transplant and lived.

Now read the second extract, and as above keep the following questions in your head as you go through it.

Mike glared at his grandad. All the long drive down, Mike hadn’t said a single, solitary word. He’d nodded, shaken his head or shrugged as appropriate whenever Nan or Gramps asked him a question, but that was it. Mike remembered how months before Gramps and Nan sat together in the courtroom never saying a word to him or each other. And how much he’d hated them for it.

‘I know what you’re thinking and you needn’t worry.’ Mike glared at his grandparents. ‘I’m not going to disappoint you.’

Let them take that any way they wanted!

‘I see that whatever else your mother did, she certainly didn’t teach you any manners,’ Gramps told him. ‘Or respect for your elders.’

‘My mum taught me that families are supposed to stick together,’ Mike said pointedly.

‘Meaning?’ Gramps prompted with a frown.

‘The meaning can wait until Mike has settled in,’ Nan said briskly. ‘We’re all getting off on the wrong foot here. Come on, Mikey. I’ll show you up to your room.’

Nan took hold of one of Mike’s smaller bags and led the way up the stairs. Reluctantly, Mike picked up his larger suitcase and followed her. Nan waited until they were on the landing before she spoke again.

‘You mustn’t mind your grandad,’ she said smiling. ‘He’s all bark and no bite.’

His bark is so bad that he doesn’t need to bite, Mike couldn’t help thinking.

Extract 1 focuses primarily on the character of Gemma.

Look in the text and find this section: ‘Gemma sighed.’

Using the text, write a detailed summary paragraph that explains why Gemma sighed.

You will need to refer to the extract in your explanation.

Revisit the text and focus on the character of Mike. He appears to be very angry in this extract.

What does the writer tell us about him through description? What do we find out about his mood through what he says and how he reacts to Nan and Gramps?

Write a short paragraph to explain how we know that Mike is angry in this extract.

You could use the following answer stems:

Read extract 2 again and focus on the last two paragraphs.

As readers, we are anticipating what may happen next.

Thinking about what you have read so far, write the next paragraph.

Imagine you are the writer, Malorie Blackman, and try to mimic her style.

Look back at extract 1 and see how she manages description and at extract 2, to see her use of dialogue.

Then decide if your paragraph will include description and/or dialogue.

Look at the clip below to remind you what an adjective is:

An adjective is a word that describes a noun (the name of a thing or a place).

For example, 'It was a terrible book.'

'The book she read on holiday was terrible' or 'She read a terrible book on holiday'.

‘Excited and enthusiastic, the girl strolled into her dance class.’

'She had a mouldy, smelly, overpriced sandwich.'

Have a fantastic weekend everyone, and I'll talk to you next week.