Type your answers into a word document or write them on a sheet and email them to me on pflood@sfdprimary.co.uk

The first thing you need to do is to review what a percentage is. Please look at the video below:

All fractions can be converted to percentages and vice versa!

Per cent means out of a hundred. When we talk about percentages, we are referring to a fraction that is over one hundred.

Instead of writing it as a fraction, we use the per cent symbol (%).

59% = ⁵⁹⁄₁₀₀Let's take a look at two methods to convert fractions into percentages.

Since not all fractions have a denominator of 100, you have to convert the fraction into one that does.

What is ²³⁄₂₅ as a percentage?

What is ⅖ as a percentage?

What if you can’t convert the fraction into an equivalent with a denominator of 100? Not all numbers go into 100 after all.

Sometimes, you have to convert the fraction into a decimal first before finding the percentage.

What is ³⁄₈ as a percentage?

Top tip: You can always use the bus stop method to help you with division.

What is ⁴⁄₆ as a percentage?

Please click here to bring you to your first task which will be comlpeted on a different website. If you get a questions incorrect please make sure you understand what the correct is before moving on to the next one. Any problems or questions, please email me.

Please click here for your worksheet. Make sure you look at the example at the top of the sheet carefully before trying some of the more trickier questions.

Who were the Anglo-Saxons

The last Roman soldiers left Britain in 410 AD. New people arrived in ships from across the North Sea – the Anglo-Saxons. The Anglo-Saxon age in Britain was from around the departure of the Romans to 1066.

They were a mix of tribes from Germany, Denmark and the Netherlands. The three biggest were the Angles, the Saxons and the Jutes. The land they settled in was 'Angle-land', or England.

If we use the modern names for the countries they came from, the Saxons were German-Dutch, the Angles were southern Danish, and the Jutes were northern Danish.

Watch the video below to find out more about the Anglo-Saxons and how they lived.

Growing up in an Anglo-Saxon village 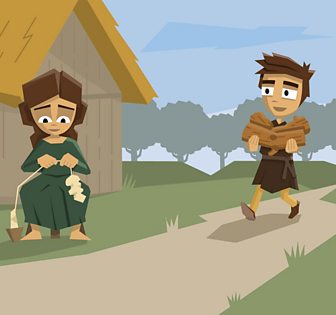 Anglo-Saxon girls and boys had lots of important jobs around the village.

Anglo-Saxon children had to grow up very quickly. By the time they were ten, they were seen as an adult. They had to work as hard as any adult and would be punished as adults if they stole or broke the law.

Girls worked in the home. They were in charge of housekeeping, weaving cloth, cooking meals, making cheese and brewing ale.

Boys learned the skills of their fathers. They learned to chop down trees with an axe, plough a field, and use a spear in battle. They also fished and went hunting with other men from the village.

Only a few girls and boys learned to read and write. The sons of kings or wealthy families might be taught at home by a private teacher. The only schools were run by the Christian church, in monasteries. Some children lived there to train as monks and nuns.

What jobs did the Anglo-Saxons do?

Life on an Anglo-Saxon farm was hard work. All the family had to help out - men, women and children.

Men cut down trees to clear land for ploughing and to sow crops. Farmers used oxen to pull ploughs up and down long strip fields. Children with dogs herded cattle and sheep.

The Anglo-Saxons had armies, but their soldiers didn't fight all the time. After a battle, they went home as soon as they could and looked after their animals and crops. 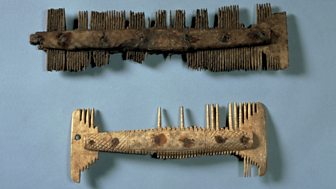 Two Anglo-Saxon combs made from bone

Watch the video below to learn more about life in Anglo-Saxon England.

Make a piece of artwork showing an Anglo-Saxon village. The type of art you wish to do, I will leave to you.

Work as usual to pflood@sfdprimary.co.uk