William Shakespeare grew up in the town of Stratford-upon-Avon in Warwickshire. His family were rich so he went to a good school and grew up to be a playwright. He wrote different types of plays – histories, tragedies and comedies.

Watch this video to learn more about William Shakespeare, including where he came from and how he became famous.

One of Shakespeare's most famous plays is Romeo and Juliet. It's a tragedy set in the Italian city of Verona, in which two young people from warring families fall in love. Unfortunately, the hatred between their families means their relationship is doomed from the start. Take a look at the animation and plot summary below.

A summary of Romeo and Juliet

Two powerful families, the Montagues and the Capulets, in Verona in Italy have been feuding for so long that they can’t remember why they started fighting in the first place!

Two teenage members of the families, Romeo (Montague) and Juliet (Capulet), fall in love at a party, but have to keep it a secret because of their feuding families. They even get married without telling their families!

In a street fight Tybalt (Juliet’s cousin) kills Mercutio (Romeo’s close friend). In revenge Romeo kills Tybalt and he is banished from Verona.

Aided by Friar Laurence, Juliet plans to rejoin Romeo and a scheme is hatched to convince everyone that she has died.

She sends a letter to Romeo to tell him of the plan, but her message never reaches him. Romeo finds Juliet and she appears lifeless. Thinking she really is dead, Romeo kills himself. Juliet wakes up, finds Romeo lying beside her and takes her own life.

Finally, the two families are reunited, due to the tragic events.

Pick a bit of Romeo and Juliet that you really like and write a 5 page script to extend on what Shakespeare has written using your imagination.

When writing your mini-script can you include some show not tell?

The show not tell rule means you don’t say what is happening or how a character is feeling directly. Instead, you show something visually through dialogue or stage directions.

For example, to show Romeo is angry you might write:

Romeo: (shouting with fists clenched) You are a wretch, Tybalt!

Remember! You can always go back and watch the Romeo and Juliet video again OR reread the summary of the play if you need help.

Sounds travel as invisible sound waves down our ear to our ear drum.

Once the sound waves hit our ear drum, the vibrations send a message to our brain which converts it into sound.

Depending on these vibrations, our brain is able to tell the:

The pitch of a sound is how high or low the sound is.

Depending how fast or slow the object is vibrating determines the pitch of the sound.

Explore pitch further in the video below.

By looking at the sound waves, you can determine whether the sound has a high pitch or a low pitch by the:

From this we know that the more peaks in the time period of the wave, the higher the pitch and higher pitched sounds have a shorter wavelength.

Sounds thar are high-pitched are made with fast vibrations and higher frequencies of waves, ie a greater number of waves occur in a given amount of time.

These are shorter, tight wiggly waves. 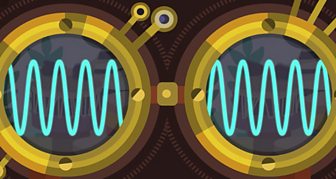 Examples of soundwaves with a high pitch

Sounds made by slow vibrations with a lower frequency have longer sound waves have a low pitch. 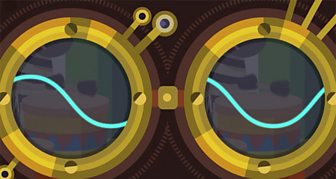 An example of low-pitched soundwaves

The loudness or volume of a sound is how loud or quiet the sound is.

Loud sounds are made by strong vibrations and sound waves that have a lot of energy - these can also travel further.

Sounds that are quieter are made by weaker vibrations and don't travel very far.

Try this online quiz about sound.

Imagine you are a TV Presenter that needs to present a short segment to educate children on sound and the features of sound.

You can use the planning sheet to help plan your presentation.

You may want to use PowerPoint slides, posters, pictures or diagrams to help with your explanations.